Congratulations to Missouri’s David Barbe, MD, on his election as president-elect of the American Medical Association. A family physician from Mountain Grove, Mo. with Mercy, Dr. Barbe will serve a year-long term as president-elect before assuming the office of AMA president in June 2017.

“It is a tremendous honor and privilege to be elected by my peers to be president-elect of an organization that is dedicated to improving the practice environment for physicians, the education of our medical students and the health of the patients we serve,” said Dr. Barbe. “I am eager to continue the strong work of the AMA in shaping America’s health care system to better meet the needs of patients and physicians both now and in the future.”

Dr. Barbe was first elected to the AMA Board of Trustees 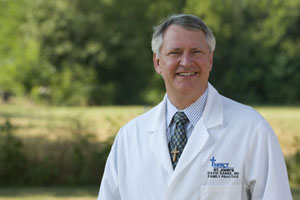 Prior to his election to the AMA Board, Dr. Barbe was a member Council on Medical Service, an influential committee of the AMA, and served as its chair from 2008 to 2009. As a member of the council, Dr. Barbe participated in the development of AMA policy related to coverage of the uninsured, health care system reform, Medicare reform and health insurance market reform.

Dr. Barbe has extensive experience as a medical society leader, serving as head of the governing board for the Missouri State Medical Association (MSMA) in 2003 and MSMA president in 2005. He was also a longtime member of MSMA’s legislative committee and a board member of the Missouri Medical Political Action Committee.

Dr. Barbe has practiced family medicine in his hometown of Mountain Grove in rural southern Missouri for more than 30 years. After 15 years in independent practice, he merged his medical group with Mercy Clinic, Springfield, Mo., a 650-physician, multi-specialty integrated group. In his current role as vice-president of regional operations for Mercy, he is responsible for five hospitals, 90 clinics and more than 200 physicians and advanced practitioners. He also serves on the executive management team of Mercy-Springfield, which was ranked No. 1 in the nation in IMS Health’s 100 Top Integrated Health Networks in 2012 and is one of Truven Health Analytics’ top 20 large community hospitals.

Dr. Barbe continues to live and practice in his hometown of Mountain Grove, Mo. He and his wife, Debbie Barbe, B.S.N., R.N., have two children and six grandchildren.