Skip to content
You are here: Home/Latest News/Physicians Advocate for Tort Reform at White Coat Rally

More than 200 physicians from across the 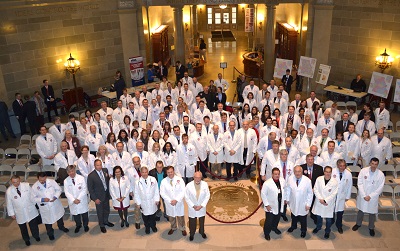 state gathered at the Missouri Capitol to advocate for tort reform and other issues of concern at the March 5 White Coat Rally organized by the Missouri State Medical Association.

Wearing “Tort Reform Now!” stickers with their white coats, physicians educated legislators about the need to restore the cap on non-economic damages in medical liability cases, supporting HB 1173 and SB 589. They observed the House debate and give final passage to HB 1173. In addition, they expressed opposition to several pieces of legislation that would allow advanced-practice registered nurses to practice without physician supervision, and expand their scope of practice to include advanced diagnosis and ordering tests.

The SLMMS contingent included President Joseph Craft III, MD, along with a number of past presidents and other members, as well as medical residents and SLMMS Alliance members.