Skip to content
You are here: Home/Medical News/Q&A with U.S. Senate Candidates on Health Care 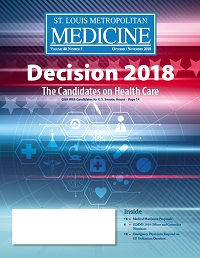 The October issue of the Medical Society’s publication, St. Louis Metropolitan Medicine, sought responses on several major health care questions from candidates for the U.S. Senate from Missouri and two St. Louis-area U.S. House seats. Thanks to all the candidates who took time in their busy schedules to respond to our questions. Multiple attempts were made to contact all candidates.

Following are the candidates for the U.S. Senate and their responses:

Josh Hawley and Japeth Campbell did not provide responses.

1. What are your priorities for enabling our health care system to provide the most affordability, accessibility and quality?

McCaskill: I support improving the health care system to ensure that all Missourians can access quality, affordable coverage. To this end, I have co-sponsored bipartisan legislation to bring down premiums in the individual marketplace. I have also worked with my Republican colleagues to remove burdensome reporting requirements for businesses. I introduced legislation to allow anyone without an insurance provider in their county’s individual market to buy health insurance on the DC exchange. And I strongly support maintaining the requirement that insurance companies cover Missourians with pre-existing conditions, unlike my opponent, who is suing to end that requirement.

O’Dear: We need innovation in our health care business model. Our pricing model now is cost-plus, with virtually no transparency or competition. We need a system less focused on paying for treatments and procedures and more focused on incentives for maintaining health and achieving positive outcomes. We have the health care expertise, the technology, the innovative capabilities, the entrepreneurial spirit to achieve better health care at less cost. Innovation is happening. But we need a political system that facilitates it, and encourages the development of a better private sector business model.

Crain: I am for the Medicare for all option that provides for mental, dental and physical therapy options. We rail about mentally ill people killing people with weapons so now it is time to end that problem as well. We have far too many people who have purchased health care in the “market” finding that the insurance is pretty worthless. Those people would have no problem understanding the actual cost of our current health care is much greater than advertised and, in fact, is killing people. The whole purpose of insurance is denying care so that the insurance companies make money!

2. Recent surveys show that an increasing number of physicians support a single-payer health system. What considerations do you think are important in determining whether a Medicare for All system should be adopted?

McCaskill: I support allowing Americans to buy into Medicare starting at age 55 and working to improve our current system. I do not believe that it is appropriate for the federal government to tell Americans who collectively bargained for better employer-provided health care plans that they need to give up those plans and take whatever the government gives them. I also do not believe that a single-payer system is fiscally responsible—nor would it fix the underlying causes of rising health care costs. Therefore, I am not convinced that a single-payer health system is the right thing for our country.

O’Dear: Medicare for All means a health care system completely controlled by the single-payer, which would be the federal government. I understand the attraction of such a system to many. I think we can and would do better if we keep our health care a predominantly private sector industry. The business model for health care, and the preferred insurance program, are two separate issues. I believe there may be a role for a public option in our insurance program, if we ever develop a rational approach to such a program. Extending Medicare eligibility to people at a younger age is an example.

Crain: The real issue is that currently insurers get a huge chunk of the health care dollar. I want insurers out of the mix entirely (except for some exceptions that the wealthy might like to have like cosmetic surgery and other kinds of treatments that are not necessary but some people want. But no more camel’s whole body in the tent!) We pay twice as much for ½ as much as other countries with socialized medicine. And get worse outcomes as noted by the mortality rates for women and children and minorities.

3. What actions would you take to control the rise in drug prices and end shortages of needed drugs? Do you support removing the “safe harbor” provision of the 1987 Medicare Act that exempts hospital group purchasing organizations (GPOs) and pharmacy benefit managers (PBMs) from anti-kickback provisions?

McCaskill: We must do more to bring down the skyrocketing cost of prescription drugs. That’s why I worked across the aisle to conduct investigations into why pharmaceutical companies were raising prices on consumers. This investigation led to bipartisan legislation to increase competition in the pharmaceutical market and lower the cost of prescription drugs. I support measures to increase transparency in the drug pricing process by manufacturers, PBMs, and insurance plans, without increasing premiums. That’s why I was the lead cosponsor of the Patient Right to Know Act to remove the pharmacy gag clauses in the ACA, employer plans, and Medicare.

O’Dear: Transparency in drug pricing should be mandatory. Doctors should know the cost of prescribed treatment. Profit margins for drug manufacturers should be transparent. Negotiated pricing between manufacturers and insurers should be accessible. Patients should know the cash price for prescriptions versus insurance copays. Eliminate excess regulatory barriers that prevent production of new drugs and generics. Additional competition in the marketplace would reduce the overall cost of medication. Medicare should be allowed to negotiate prices directly with manufacturers. I support removing exemptions for GPOs and PBMs from anti-kickback provisions. They should not be allowed to receive dark money from drug manufacturers.

Crain: I would make it illegal for pharmaceutical companies to advertise again. Drugs are really too dangerous for the industry to convince people who don’t know enough that they just must have this drug or that. I would also like to see wholesale bargaining with the drug industry as a product of Medicare for All for cheaper prices as well as agreements to manufacture some needed drugs that are somewhat rarely used. Kickbacks to doctors and a board to decide the bargaining and the rare drugs to be manufactured should be illegal.