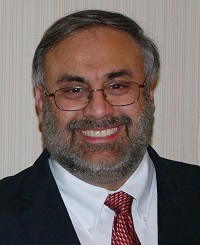 Ravi S. Johar, MD, a board certified obstetrician-gynecologist, was formally installed as the President of the Missouri State Medical Association for 2016-2017 on Saturday, March 19, during the MSMA’s 158th Annual Convention in St. Louis.

A supporter of the mission of organized medicine, Dr. Johar is a long-time SLMMS member and leader, serving as SLMMS President in 2006. He currently chairs the SLMMS Nominating Committee, and serves on the Membership and Bylaws committees. A member of the MSMA Council since 2007, he has served in a variety of roles at the state level, including Council Chair in 2014.

He is a fellow of the American College of Obstetricians and Gynecologists (ACOG) and is Vice-Chair Elect of the Missouri Section. He has previously served as the Secretary-Treasurer of MoACOG, and was selected as a Cefalo Fellow by National ACOG. Dr. Johar currently practices with Mercy Healthcare, and during his career has delivered more than 9,100 babies.

Congratulations to the other SLMMS members who were also elected to statewide roles at the MSMA Annual Convention. David Pohl, MD, was elected Treasurer of the MSMA Council; Elie Azrak, MD, and George Hruza, MD, were elected to the MSMA Council; Steven Slocum, MD, was elected Vice-Councilor. At the District 3 (SLMMS) caucus at the convention, Edmund Cabbabe, MD, was re-elected to another term as an AMA delegate from Missouri, and Elie Azrak, MD, and Nathaniel Murdock, MD, were re-elected as AMA alternate delegates.