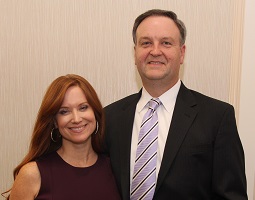 Practicing in anesthesiology and pain management with Western Anesthesiology since 1997, he is an attending physician at Mercy Hospital St. Louis. He also is an adjunct assistant professor of anesthesiology and critical care at Saint Louis University School of Medicine. He is taking temporary leave from medical practice to serve as County Executive.

Until his appointment as County Executive, Dr. Page has served since 2014 as St. Louis County Councilman representing the 2nd District. He was elected council chair in January 2017 and re-elected as chair in 2018 and 2019. In this role, he has persistently advocated for accountability and transparency in county government.

Dr. Page led the effort to establish the prescription drug monitoring program based out of St. Louis County that has expanded to include 72 jurisdictions across Missouri representing 84% of the population.

Previously Dr. Page served in the Missouri House of Representatives from 2003-2009. He was the 2008 Democratic nominee for Missouri lieutenant governor, losing a close race. He also served on the Creve Coeur City Council from 1999-2002.

He is a graduate of the University of Missouri-Kansas City School of Medicine, where he was selected into Alpha Omega Alpha medical honor society. He completed his residency at Northwestern University and a fellowship in pain management at Washington University.

Dr. Page is married to Jennifer L. Page, MD, a physiatrist and a member of the St. Louis Metropolitan Medical Society Council, the society’s governing body. They have three children. He has served as the cubmaster for Cub Scout Pack 499 and currently is a Merit Badge counselor for Citizenship in the Community and Citizenship in the Nation for the Greater St. Louis Area Boy Scouts.