The St. Louis Metropolitan Medical Society installed officers, presented three awards, and recognized members who have been with the organization for 50 years or more at their 38th annual meeting and installation banquet on Saturday, January 10, 2015, at Kemoll’s Top of the Met. 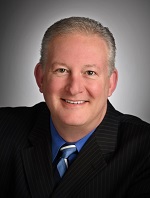 Dr. Michael J. Stadnyk, a radiologist with Diagnostic Imaging Associates at St. Luke’s Hospital, was installed as the 2015 SLMMS President. A SLMMS member since 2006, Dr. Stadnyk was elected to the SLMMS Council in 2009, and has served the last two years as Vice President and then President-Elect.

Dr. Nathaniel Murdock received the Robert E. Schlueter Leadership Award in recognition of his contributions to the St. Louis medical community. Dr. Murdock became only the 19th recipient of this prestigious career award, which was presented for the first time since 2010.

Dr. George Hruza, a Chesterfield dermatologist and Mohs surgeon, received the 2014 Presidents Award in recognition of his work advocating for fellow physicians and patients when insurance companies narrowed their networks and terminated physicians without cause in 2014. 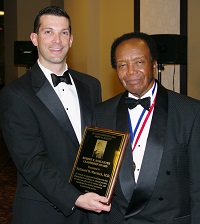 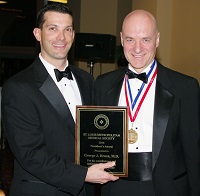